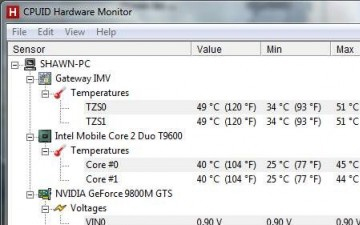 HWMonitor is a handy little gizmo available from CPUID.com that lets you monitor the temperature and voltage of different components on your computer.

Computers get old. This is a fact that no one, however gifted in the computer realm, can avoid. As they age they develop problems in being able to run efficiently and sometimes get to the point of hindering normal activity to the point of frustration. HWMonitor is a handy little gizmo available from CPUID.com that lets you monitor the temperature and voltage of different components on your computer. While basic-level users (grandma and grandpa) would have no idea what to do with this information, many will find it useful to know exactly how many degrees are being produced and where.

I stumbled across this program while trying to figure out what was wrong with my own laptop. One day while playing a game online, my frame rate would suddenly spike down to 10-20% of the normal for about 10 seconds then return to normal. It would do this constantly and make any type of game unplayable. I tried everything from taking apart my computer and dusting it to reinstalling windows but nothing seemed to work. I did a little research and found it could be due to overheating. Many sites recommended HWMonitor to check my temperatures, so I decided to give it a try. Lo and behold, after firing up a game and monitoring my computer, I found that one of my sensors on my heatsink was jumping instantly from 67° to 98 ° thus making my CPU throttle itself to manage the heat.

The download process is simple: run the .exe file once you have downloaded it. When installation is complete, double click your HWMonitor icon and the program will auto-detect your hardware and start monitoring temps and volts. When it is up and running, you can take an instant record of your system’s information by going to File > Save Monitoring Data. 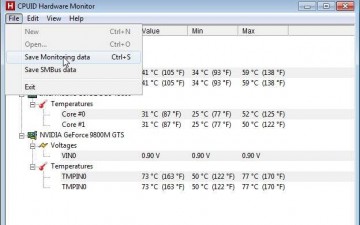 After you save the text file, you can view it later. It should look something like this: 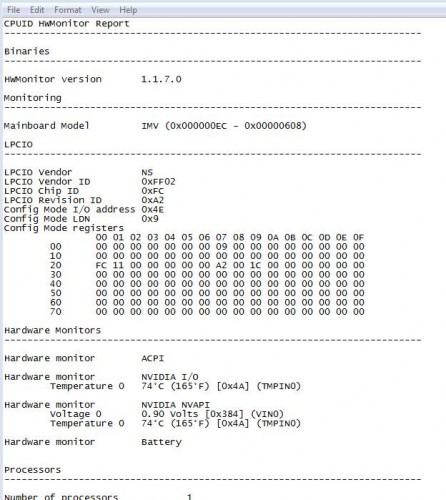 While at first I thought this could be a good way to keep records of your temperatures, I later learned that the data is saved with the same name in the same path every time, overwriting the previous file. In order to save records or keep a timeline of saved data, you would need to rename the file after saving to keep it from being overwritten.

While this program may not come with the bells and whistles of other monitoring programs, (an on screen display, tray display, and graphing system were not provided in the free version, but are in the Pro version for a price) it will do the job it was meant to do with ease. I would highly recommend this for anyone looking to simply monitor system temperature.