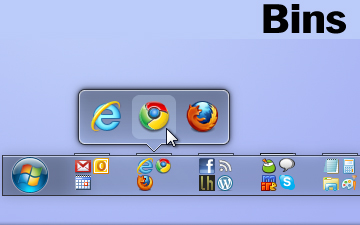 Bins happens to be a Windows taskbar organizer which can group multiple pinned tabs by binding them together to reduce taskbar clutter.

Among the many great features of Windows 7 I have taken a liking to the ability to pin items to the taskbar (also called superbar) the most. Having the option to do this makes my everyday computing immensely convenient.  It is also more flexible than the quick launch option that was previously present in earlier Windows versions like XP and Vista. On the other hand if one has too many items pinned to the taskbar, it can result in a lot of clutter. A remedy to this dilemma has been provided by the developers of Fences with their new utility called Bins.

Bins happens to be a Windows taskbar organizer which can group multiple pinned tabs by binding them together to reduce taskbar clutter, it is as if you are created a folder within your taskbar. Doing this allows users to pin related items together, so they can easily identify and launch programs belonging to same group without having to pin each app to taskbar.

This will allow you to set multiple pinned items together in such a way that you will be able to reduce clutter on your taskbar (and even on your desktop). It is vastly useful to pin related programs like browsers for easy sorting and identification of taskbar items.

Bins sits in the system tray, where you can access the Settings to configure the provided options and features. The Taskbar Tweaks tab can be used to enable the indicator line on icons, and to configure Aero Peek and Taskbar related behaviors, respectively. 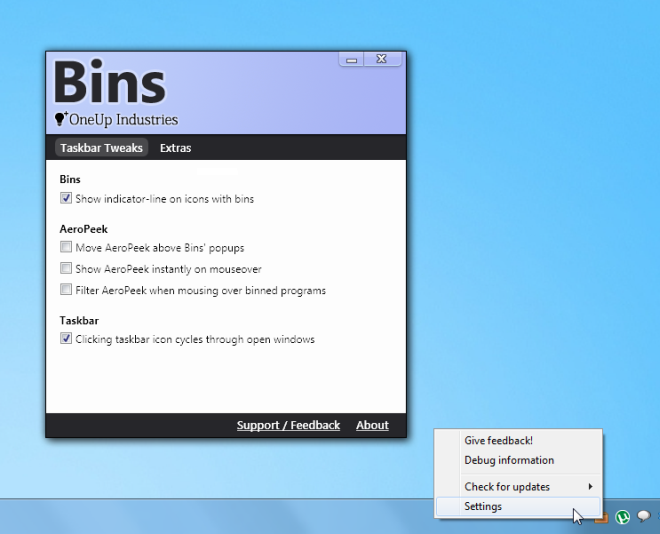 If you would like to temporarily disable Bins or get a default view of the pinned items, head over to the Extras tab and click on the ‘Disable Bins’ button. To restore it, simply click Undo. Here, you can also lock bins from editing, retain a single line if your taskbar is set to auto hide and view system tray icons on mouse hover.

To download Bins, you will need to provide email address in order to receive a private beta invitation from the developer. It must be noted that Bins is currently in its initial beta testing phase, therefore users might experience some bugs and functionality related issues. However, we did not experience any problems during using the program the last few days.

Give Bins a try now!