Which has a faster data transfer rate the Verizon iPhone 4 or AT&T iPhone 4? If you’re concerned about maximum 3G transfer speeds, AT&T may be the network you want to stay with.

As you can see in the graphic below, SpeedTest results show that iPhone 4 downloads and uploads were considerably faster on the AT&T network when compared to the Verizon network. In Engadgets testing, download speeds through AT&T reached a maximum of 3.57 Mbps versus a maximum of 1.32 Mbps on Verizon. The margin for uploads was similar, with AT&T’s upload speed reaching 1.39 Mbps vs a peak of 0.54 MBps uploading through Verizon. This is not to say that the Verizon 3G network is slow, it’s just slower than AT&T’s. 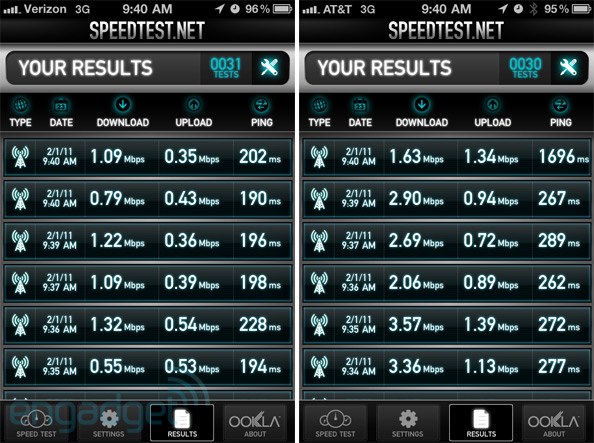 The one exception is Verizon’s faster network latency. In certain situations the slower ping on AT&T’s network could make some transfer feel slower just because there’s a longer response time before data begins transferring.

The speed test in the above image was performed by Engadget but their results weren’t unique, several other early reviewers have found the same conclusions, although not always with such a stark difference. Here is Wired confirming that AT&T is faster than Verizon:

How does this play out in day to day use? Wired again:

Not all grass is green on the AT&T side though, both Engadget and Wired note that AT&T’s network is less reliable and has reduced voice quality during phone calls.

How much does 3G internet speed matter? This depends on how often you transfer data, for someone who tethers their iPhone with MyWi this is obviously more important than to my Mom who just wants to send a few emails and make reliable phone calls. The importance of transfer speeds really comes down to how you use your iPhone.

You can test your own iPhone network speeds with SpeedTest from the App Store, it’s free.