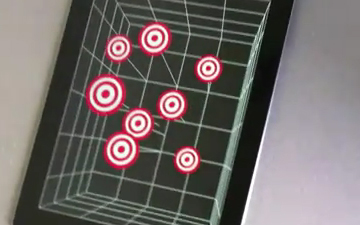 Developers have now found a way to create 3D graphics using an iPad 2, check out the video testing out the application.

Found this video earlier today, which was created by the EHCI Research Group at Grenoble Informatics Laboratory and I was simply stunned. With this technology starting to take off you can bet mobile developers will be inserting it into their games and apps in the near future. The biggest letdown of the current generation of 3D is having to wear the glasses, but with this you no longer have to.

At first glimpse it looks as if the 3D is being controlled by the accelerometer of the iPad but after further research it is in fact the front facing camera which is tracking the movement.

The creators of the video left some more info on this project on their YouTube page stating:

“We track the head of the user with the front facing camera in order to create a glasses-free monocular 3D display. Such spatially-aware mobile display enables to improve the possibilities of interaction. It does not use the accelerometers and relies only on the front camera.”

Don’t video chat? No worries your front facing camera won’t go to waste now that you can use it for 3D!