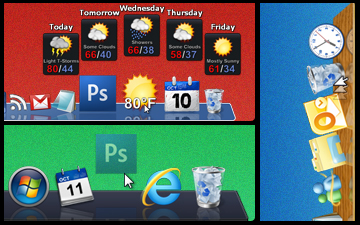 ObjectDock is a Mac-like panel that provides easy access to useful shortcuts and serves to replace your taskbar on Windows.

Stardock software makes a great tool called ObjectDock, the most recent version 2.0 comes with two versions, Free and Plus (Which is $19.99).  The free version is great if you want a dock similar to what you get with the Dell dock that comes on some new Dell computers, or the Apple Dock that you see on all Macs.  Below is the difference between the two versions, for the purpose of this review I am going to be highlighting the ObjectDock Plus version. 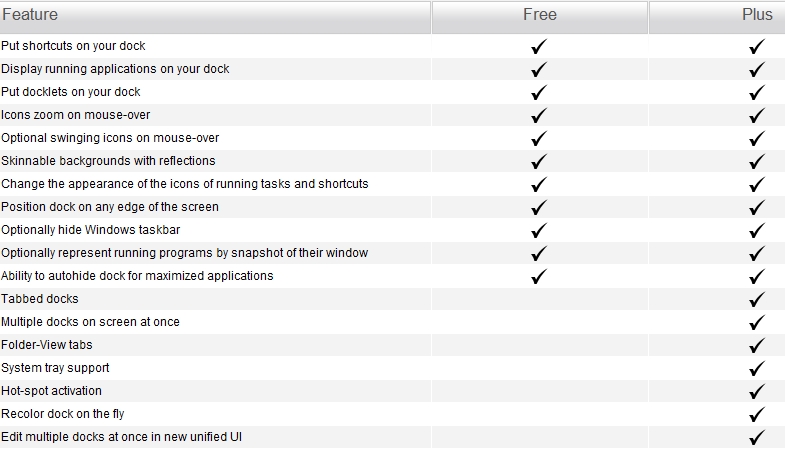 The “Dock” can sit in all the locations that the windows taskbar can: top, bottom, left and right whichever you prefer. As you can see below I have mine split into three areas, the far left are the launching icons that contain the apps that I run, most of them are flyout menus which i will get to in a bit.  The dots are separators that you can add on your own and place where you want, in the middle between the separators are all the icons of the programs that are running on the machine currently, the blue dot at the bottom of the icon signifies that (you can change that dot to other notifications also). to the right of the last separator are other icons that I use less often.  On the far right are the icons that would normally show up in your system tray, you can chose to show those icons or not, that decision is up to you the downfall is the icons are brought to the same size as all the rest which makes them look horrible.

You can also completly hide the windows taskbar and use only the dock, the dock does allow you to hover over the programs that are  running and show you the screens (Windows 7 Aero required).  As you can see this does look exactly like it would if you were not using ObjectDock and just using the regular windows interface.

ObjectDock also has another great dock called the multi-tabbed dock, it has a dock like feel but has tabs on it that allow you to have multiple pages for all your icons or documents.  It somewhat remind me of OneNote with it’s tabbed design.  As with the regular dock you can also change the look and feel of the icons by changing the themes the colors and even the icons for the various pieces.

There is also a neat feature called flyouts that lets you have a single icon be a gateway to many other icons or information, you can add a group of folders or a group of icons instead of having them all cover your dock and make it some huge monstrosity. You can adjust the main icon look and feel as well as all the sub-icons, when you chose the main icon it becomes larger and a flywheel appears allowing you to go right to left or vice versa and then select the app or information that you desire.

This is a great way to keep everything organized and neat and contained within one dock rather than having to create multiple ones (because lets face it we all suffer from icon clutter eventually).  I hope this article sheds some light on this great app from Stardock, it only scratches the surface when it comes to features and options within this app. Check it out and download the app for yourself and get lost in all the possible configurations and cutomizations that you can do.